Dordrecht, 11 December, 2005 - The last motor test (CMT0506) went well, although the performance of the motor does not seem to improve as wanted. Some radical changes were proposed and implemented. Three things were changed. The number of grains in the motor was lowered from seven to six, but the overall length of the motor was retained by increasing the length of the grains from 80mm to 93mm. The throat diameter changed to 11mm. And the two upper hollow tube grains had an inside diameter of 15mm instead of 20mm.

The test was postponed several times, but finally took place on 11 December. Preparation of the site and motor went smoothly, although a small part of the motor was forgotten and caused some delay. The motor was placed in the test bench and the igniter connected. But a few moments later the test motor didn't ignite. Everything was checked, from igniter to launch box, batteries were replaced, everything was rechecked, bu replaced, everything was rechecked, but it still didn't work. After an hour we finally discovered the problem. A fuse in the launch box was broken. Meanwhile it had become dark, but the test went on nonetheless.

The test motor itself started well, but the safety mechanism was activated just 3 seconds after ignition. We are not sure why the motor performed as it did, as we expected something else. The next test will be a follow-on of the CMT0506 test with just one thing changed instead of three. The safety mechanism will be replaced, as its response time is to long. 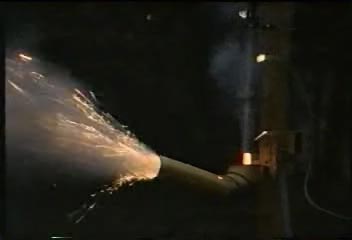