Dordrecht, 30 March, 2008 - After the spectacular failure during our last Kalinitrox motor test some 18 months ago, while not working on our new club house, we were discussing what went wrong in our motor research the last few years. We now suspect that the improved Kalinitrox was unstable due to the higher percentage of potassium perchlorate in the propellant compared to the original Kalinitrox. This became very clear in the last test and it also explains two years worth of strange test results and failed tests. The new test program is based on a motor with Bates grains and the original Kalinitrox. After each test we are going to carefully increase, small steps at a time, the percentage of potassium perchlorate, until we have a good working pressure. A new test motor was designed, using four threaded rods to hold the upper and lower closure together. The redesigned flight motor will use snap rings. The upper closure of the test motor holds the pressure gauge and safety membrane. It was made by Benjamin Wilkosz. Meanwhile Peter Heeren had rebuild our test stand, which had been damaged during the last test. Eventually only the feet remained and he had build a new upper structure in his usual heavy solid style, which is not a bad property of a test stand.

After a small transportation issue had been resolved and all test motor and test stand parts collected, we left to our test site in Dordrecht. Although we were a bit unaccustomed with the test stand it was quickly erected on a paved area and later moved into the muddy field. The test motor itself was also quickly assembled (which was the point of redesigning it) and soon the test could start. The test itself went wonderfully well and nothing unexpected happened. The smoke the test motor produced was very white, indicating optimal use of the propellant. The test seemed to go on forever, but this was to be expected at a low pressure. After the test we went looking at the test stand, which had worked very well. No residue was on the stand itself, it was only inside the smoke deflector. The test motor had some neglectable leakage at the safety membrane, but otherwise looked fine. While the test data was retrieved, we started to disassemble the test stand. In between we could see the results and they looked good. We packed and left for the club house.

At the next club meeting we discussed the test results. While the top pressure of 32 bar (3200 kPa) is not that impressive, it is to be remembered this test was meant as a safe starting point for further testing. Thus it becomes a promising starting point and the results were actually near the top of the range what we were expecting. Also the motor looks very stable now and the pressure curve looks fine too. The next test will feature a motor in the same configuration, only the percentage potassium perchlorate will be slightly higher. 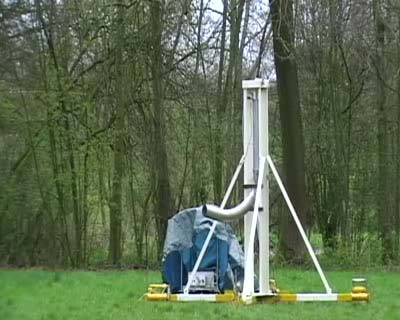 Video footage of the motor test.