Dordrecht, 8 May, 2008 - Following the successful restart of our Kalinitrox motor research project with motor test CMT0801 a month ago, we were expecting good results this time too. The motor of the new test project was a reconfigured version of our original Kalinitrox K1800 motor to a Bates-grain configured motor, but with the original propellant mixture. In accordance with the new research project plans, the following test was going to be with an increased percentage of potassium perchlorate, but otherwise nothing of the motors configuration was changed.

The test was held on Thursday evening 8 May and the weather was fine. The motor test stand was quickly erected and the motor was assembled in no time too. There was small delay, because we had left the pressure and thrust gauges at the club house. When they were collected and mounted on the test stand the test could begin. The test started promising, but soon the safety membrane broke. With a second opening the motor pressure was instantly lowered to a safe level. The propellant was burned away at a leisure pace and out of both openings produced a lot of dark smoke. After the test we checked the motor in its stand and apart from the broken safety membrane and some insignificant leakage around the safety membranes clamp (like the last test) no other problems could be seen. A quick glance at the pressure curve showed that the safety membrane broke after 0.4 seconds at 115 bar. Compared to the peak pressure of 32 bar at the last test, this is a huge increase and without the safety membrane the pressure would be much higher. The next day when disassembling the motor it was discovered the O-ring at the upper closure (measurement head) was heavily carbonized on the inside due to the long burn and now more resembled a "D". Otherwise it all looked like other failed motor tests and it had lots of residue in the liner of the lowest grain.

It seems that increasing the potassium perchlorate with what we thought of as a small percentage has huge effects on the propellant. Keeping with the pre determined test project we decided the next test will be with roughly half of the increase of potassium perchlorate as in this test. Otherwise the motor configuration will not change. Based on the results of the next test we will decide how we continue the test project. Hypothetical this could mean the following test phase will be using a larger throat and a series of tests with increasingly more potassium perchlorate starting with that of the next test. Or we could decide to keep using the original percentage and try to optimise the propellant using catalytic agents, but it can be another research path all together. 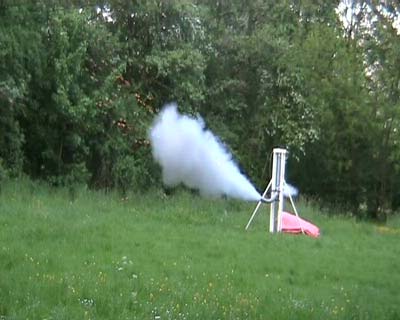 Video footage of the motor test, seen from the front in overview. 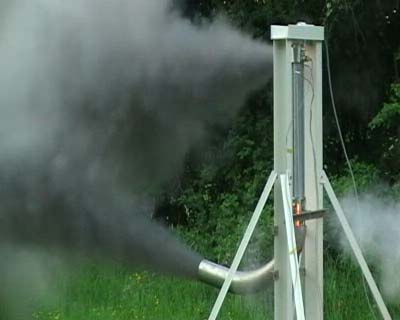 Video footage of the motor test, seen from the back in zoom.