Maasvlakte, 15 August, 2008 - For the first time DARE was to launch a rocket on the freshmen students introduction of the TU Delft Aerospace Engineering's student union "VSV Leonardo da Vinci" (of which DARE is a part). The NAVRO was present with a launch tower and for supervision. The (long) day before the launch DARE had built a simple HPR rocket. Unusual for DARE, the rocket was propelled by a commercial motor, as with the new regulations only commercial propelled rockets may be launched outside military bases. Although a little rough, the EJW rocket was very well built.

The launch was in the afternoon of the day in between the air show, which was organised for the students. After motor assembly and preparation, the launch was postponed for an our to make the way for more aircraft fly by's. But the waiting was awarded and when the rocket was launched, it looked very pretty, with the sea just a few meters away. The rocket flew very well, but didn't parachute and crashed in the sea, not to be seen again unfortunately. 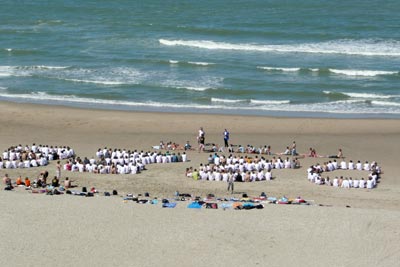 Video of the launch.