This article about Benjamin Wilkosz and his friends was first published in the June 2006 edition of the Dutch men's magazine Esquire. Although not very well written and uses poor grammer, it gives an inside look at our hobby. This is the English translation. If you want you can also view a scan of this document.


The English translation of the original Dutch transcript:

Where: a remote part of a forest near Heerlen.
Why: a rocket test.
The group: Benjamin Wilkosz (23, green shirt), Rafaël Wilkosz (24, with rocket bag) and Dominik Geisler (22, with glasses).
The moment: it all started with a toy model rocket which Benjamin got from his grandfather in the early nineties. "And then it all got out of hand."

A Saturday afternoon in 2006. On the sofa of his house in Heerlen the same grandfather is smoking a cigar. Two rooms he has lost to the boys' hobby, as well as the cellar and a shed. In that cellar, hanging on the ceiling, are rockets (type scud rocket, not type space shuttle) with names like G-Loc, Kerberos and Apotheose. They vary in length between 75 centimetre and almost two meter.

In the shed we find a frying pan. "It can be used to melt chemicals at the right temperature," Benjamin explanes. And behold: the propellant grains. Those chemicals are, due to the terrorism threat, illegal, unless you have a permit like Benjamin.

They make it all themselves. All: the propellant is produced by melting potassium nitrate and sorbitol, the "skin" of the rocket is made of kevlar, board computers to record flight data, all the mathematics, and the parachutes for a soft landing too. Child's play? Mwoah: the orange Kerberos fly subsonic at 1075 kph and reached a height of 2,5 kilometre. "The acceleration of that rocket is 25g," says Rafaël, "a human cannot survive that." The new project, the Terminal Velocity, will surpass this. No, we didn't experience a launch. That's not allowed. Twice a year, the military base ASK 't Harde is reserved for rocket hobbyists. Air traffic is rerouted then.

A hobby like this takes time, says Benjamin. "It takes one and a half year to finish a rocket, before you can launch it." Is it any use to them? Dominik: "Concrete? No, actually their is little use for such knowledge." Benjamin: "But again, another handbag, that is even less useful." And, how do they sell it to their girlfriends? They have to think. Finally Rafaël responds: "You just have to sytematically hide all costs. That's all." 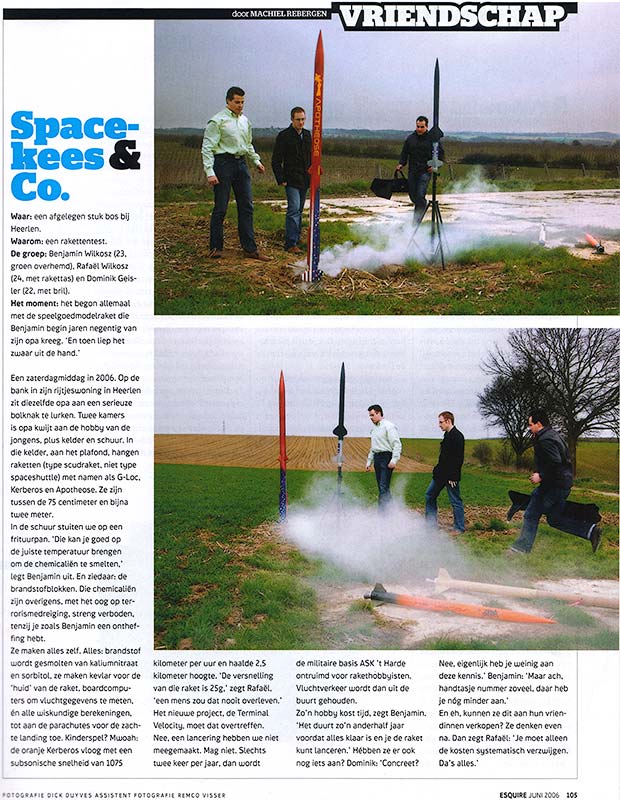 This is a scan of an article about Benjamin Wilkosz and his friends. It was first published in the June 2006 edition of the Dutch men's magazine Esquire.